Front-end loader trucks (FELs), with their amazing functionality and reliability, are arguably more profitable than any trash truck in the waste industry today. Watching a front-end loader at work is like witnessing a perfect synchronization of mechanical movements, all working together to simplify the arduous job of waste collection.

Using hydraulic forks on the front, an FEL lifts garbage bins up by the slots on their sides, and then tips them over, so the lid of the bin opens and its contents are dumped into the box of the truck. Once the transfer is complete, the bin is lowered back to the ground and the flap on top of the truck closes.

Inside the box, the waste is compacted to make more space. After several such stops, when the box is completely full, the vehicle carries its load to a designated disposal site or recycling facility.

This automated process allows FELs to offer businesses, offices, shopping centers, restaurants, apartment buildings, etc. an efficient and cost-effective way to dispose of their garbage. Without their service, waste collection in populated urban areas would have become a very complicated and time-consuming undertaking.

So how did front-end loaders come to be? 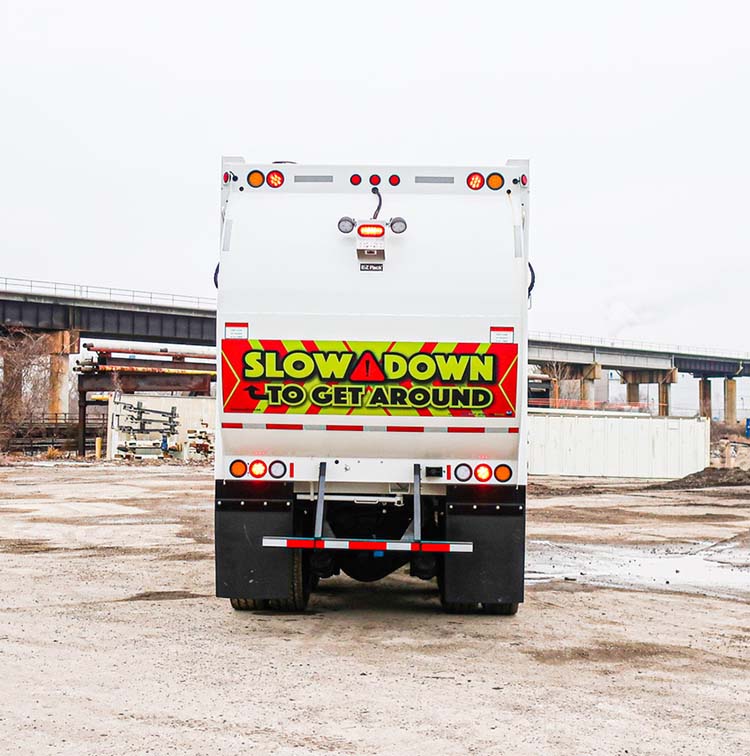 To understand that, we have to step back in time to the post-World War II era, when many industries were experiencing their first technological boom, not from war supplies but from economic growth.

As urban areas became more congested with people coming to the cities for factory jobs, garbage collectors had to find new ways to handle the influx and keep communities clean and disease-free.

Bucket-rear loaders were already in use, and while they were an upgrade from the older, open dump bodies, they required several men to load up the garbage. This wasn’t a tenable solution with the increasing quantity of refuse being generated.

The front-end load trucks came to market in the 1950s, as the first automated solution that the waste collection sector badly needed. In their early days, these vehicles only serviced residential areas, but their value and versatility in commercial applications as well was soon realized.

“With an almost simultaneous creation on both sides of the country, the philosophy behind the front load design saw two schools of truck bodies emerge: East Coast and West Coast,” writes Zachary Geroux in an in-depth historical article about FELs in Waste Advantage magazine. “The stricter weight laws of the West Coast forced builders to develop creative ways to maximize the legal load while the East Coast focused on a higher compaction rate due to the bigger population ratio and less stringent weight restrictions.”

Through decades thereafter, as technology advanced, front-end loaders went through several upgrades and iterations. By the 1990s, the industry standard was largely over-the-cab arms pulled by cylinders with either a half-pack or full-pack blade.

We spoke to Bryan Bachmann, the Product Manager for Roll-Offs and Hook-Lifts at Custom Truck One Source, to get an expert’s perspective on front-end load trucks.

Excerpts from the interview:

Explain the difference between commercial and residential front-end loaders.

At Custom Truck, we deal in what’s known as the commercial front-end loader. Commercial businesses – like a Wendy’s or a Dollar General or whatever – typically throw their trash in a front-load container, which is about 4-6 yards. They are placed in what’s known as corrals, usually out of sight, enclosed between two gates.

How does a commercial front-end loader work?

A commercial front-end loader comes on its route to pick those up. It pulls in and stabs the container, so the forks go into the pockets on the sides. It slightly raises the container up, backs up, dumps the contents into a hopper (already attached to the truck behind the cab) and sets it back down. The front-end loader then compacts the trash (there is a push blade that compacts it) and hauls it away to a transfer station or a landfill to dump the whole load.

How does a residential front-end loader work?

The residential front-end loader is an adaptation that does residential runs, picking up garbage cans from houses. They can adapt the front container in what’s called a Curatto can (developed by John Curatto) that allows them to do residential with a front-load truck. Depending on route density, they can do anywhere between 800-1,400 runs per day.

What are the advantages of acquiring a front-end loader from Custom Truck One Source?

We work with E-Z Pack, and their Hercules model is probably the most operator/owner/mechanic-friendly unit on the market today. There are no hidden computers and no complicated software to deal with. It is designed to pick up containers, move trash, and make you money – and it does all of those things very well.

The second advantage, which is true of all Custom Truck products, is that we’re never out of stock. We have units on the ground at all times, which isn’t the case with most American dealerships. Plus, we have incredible financing options and a ramped-up customer service division.

At Custom Truck One Source, we take great pride in the E-Z Pack Hercules Front Loader, which we always have on the ground and ready to go to work for you.

The E-Z Pack Hercules is no newcomer to the industry. Developed in the early 1980s, it has proven itself to be a durable machine that will give you many years of productive service.

Some advantages that give the E-Z Pack Hercules front-end loader its leading edge are:

Contact Custom Truck One Source and let us show you the FEL to best support you and expand your business!