Knuckle Boom Trucks: Cranes for Anywhere and Anything

The boom truck market is projected to exceed $ 1.5 billion by 2024. According to Fred Ross, CEO of Custom Truck One Source, the market is ripe for the taking. “Custom Truck continues to be the leading distributor of boom trucks year after year because we truly believe in their versatility on the jobsite,” he said in an interview with American Cranes & Transport. “So, we are thrilled – and not surprised – to see its adoption come back in full swing across many of the core markets we serve.”

Indeed, boom trucks are enjoying their moment as the heavy equipment of choice in a variety of applications. And one piece of equipment getting attention in the industry right now is a compact, versatile workhorse built with incredible engineering technology: the knuckle boom truck.

Also known as a picker crane, articulating crane, and loader crane, the knuckle boom resembles a traditional straight boom, except that it has two booms: a main boom and an outer one. `Knuckles’ allow for articulation, a bendable action much like the way knuckles move on human fingers, which give the equipment its unique advantage.

Lighter than conventional boom cranes, the articulated boom is mounted on a truck, which takes up minimal space. This leaves room to carry additional payload on the truck bed as well. When not in use, the boom folds up inside of itself and stows comfortably behind the cab of the truck, making transportation very easy. 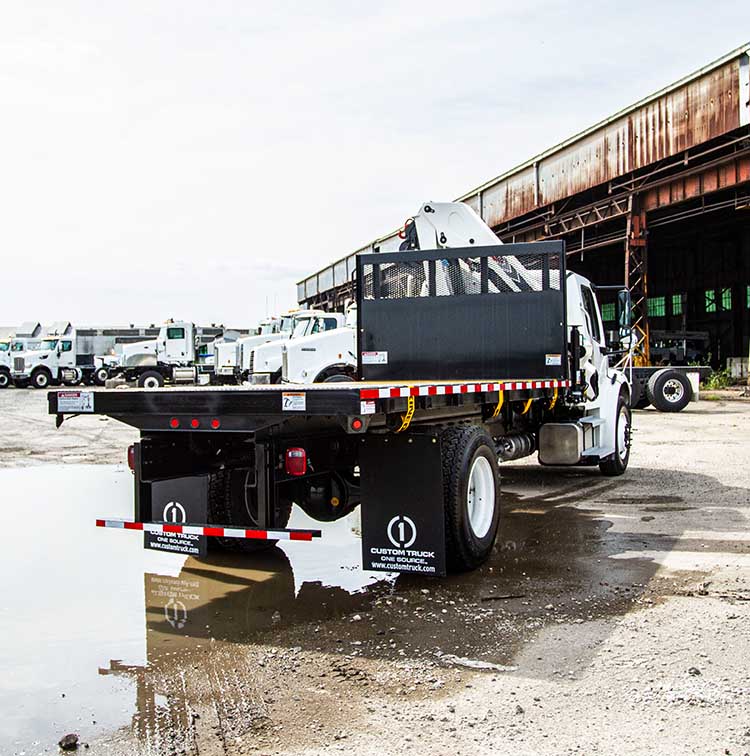 Despite the fact that knuckle boom trucks have been incredibly popular in Europe since the 1960s and 1970s, their adoption in the United States was slower.

Part of the reason is the difference in working conditions. In Europe, where urban areas are densely populated, the articulation of knuckle booms made development work possible in tight spaces. The United States, on the other hand, has wider streets and open spaces, and did fine with traditional telescopic, stiff booms. They therefore felt less need to innovate.

Another reason was scarcity of servicing and parts. Knuckle boom manufacturers located in Europe didn’t have a wide network of service centers in the United States. This meant American buyers risked extended downtime when equipment failed and parts had to be procured.

A third factor that discouraged the American market in the past was the idea that knuckle booms were short in reach, and in order to achieve an 80 ft. reach, one had to use a telescopic crane.

Over time, though, these concerns have gradually been put to rest. Knuckle booms, with their multipurpose applications, extended reach, lighter weight, and significant payload capacities are too versatile to be ignored any longer. With good distribution networks now in place all over the United States, the barrier of entry has finally been removed.

Stiff booms are still a popular option here, but knuckle booms are showing their potential every day as a smart, flexible, modern-day alternative.

We spoke to Dave Taff, VP of Building Materials at Custom Truck (CTOS), about knucklebooms in the company’s inventory.

Excerpts from the interview:

What industries use knuckle boom trucks?

Any job that requires lifting, loading, and unloading of heavy materials has a use for knuckle boom trucks. The equipment finds applications in forestry, roofing, construction, building supply, ground transportation, sea transportation, mining, petroleum, and general crane lifting services (taxi cranes). And the possibilities of updating the articulating boom with job-specific attachments extends its usability in many more ways.

What kind of knuckle boom trucks does CTOS sell?

We have a variety of knuckle boom cranes available, including models from IMT, Fassi, and Hyva. With capacities ranging from 1,740 lbs to 38,185 lbs, these cranes are ideal for handling palletized materials and can come on a variety of chassis.

What differentiates CTOS from its competitors in the knuckle boom market?

Service is the key differentiator, and service support is our biggest advantage. We are able to source parts and deal with other needs of our customers very quickly. After all, companies that use knuckle booms need their trucks to be up and running at all times in order to make money.

What are the benefits of buying a knuckle boom crane?

• Despite their compact construction, knuckle boom trucks have the capacity to lift heavier material than other equipment in their size category.

• Unlike a straight boom, knucklebooms can be used in tight spaces because of their articulated, fold/unfold design.

• They can lift material in a horizontal position, which makes them easy to operate in low clearance locations.

• They require less vertical clearance to load and unload.

• Besides the mounted crane, which is relatively light in weight, knuckle boom trucks can also carry cargo in the truck bed.

• Different attachments, such as pallet forks, grabs, and buckets, at the end of the loader crane make them adaptable for various applications in different industries.

• Knuckle boom cranes can be mounted on not only trucks, but boats and railcars as well.

• A truck-mounted crane can be positioned behind the cab or at the rear of the vehicle. The latter allows material to be deposited and lifted from a trailer towed behind the truck.

• The potential of employing knuckle booms for a variety of applications reduces the number of vehicles needed at any jobsite.

• Operating knuckle booms saves on transport fuel when moving the equipment from job to job.

• As the knuckle boom operates on automation, the need for manual servicing is minimal.

• The growing popularity of knuckle booms means more technology backing to innovate and upgrade in this category.

3 Tips on How to Choose a Knuckle Boom Truck

If you have decided to purchase a knuckle boom truck, you already know that this investment is going to bring solid returns for years to come. But all knuckle booms are not made equally, and finding one that best serves your purposes requires a bit of digging.

Here are some tips:

Looking to buy a knuckle boom truck that’s right for your business?

Custom Truck One Source has you covered!